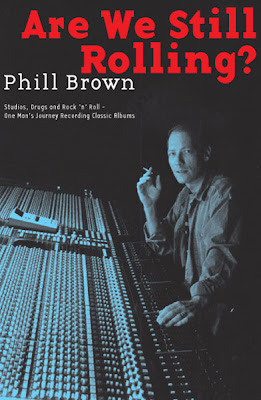 I came across this during my research for Made In Walthamstow and ordered it as it seemed a rather unique take on the record business of the 70s and on - from the perspective of a well respected and accomplished sound engineer.  How fantastic that I found it even more enjoyable as it talked about the work of some of my heroes and favourites (Robert Palmer, Alan Spenner and Steve Winwood in particular) and about albums that I was responsible for manufacturing whilst I was at PolyGram (1978-1983).  It is a personal account of Phill's journey through a career of many highs both commercially and artistically (and at times chemically); of the characters that worked the industry for good or bad (a third devil category are those, there by chance and who treated it all with indifference); of the creation of some fantastic music; of the techniques used and the knowledge, experience and luck that brought them together.  Robert Palmer's forward describes it well when he says -

"This is not a technical manual (although it will certainly function as one) - it's a contemporary thriller.."  "That's what Phill Brown has written here - an adventure story.."  "It's a how-to book and a love story! A self-driven need to understand why creative people do what they do, and how to survive it and them"
When I was trying to get into the business I was told "get a job making the tea and then make yourself useful" - Phill Brown had an entry via his brother who worked at Olympic Studios and he would go and watch/help, obviously fascinated by the process - he found his way in and then did the "make himself useful" bit by working as tape operator at many of the never ending days and night owl sessions of the stars of the day including Hendrix, the Stones, Dusty Springfield.
I love the mix of tech - mic set ups and reverb units and echo capture and the commercial reality, but the description of the periods of frantic creative process handled by a mixed cast for each new project; the issues (face fits? perhaps?) that led to being on a session or not all give another angle to the industry that interests us all.
One story of a recording struck a particular note with me.  Almost by accident, the author got involved in the recording of an album by Paul Carrack ("NightBird"), eventually co-producing the tracks and organising the sessions comprising a band (for me) to die for (Spenner, Lindscott, Hubbard, Renwick, McCalla, Collins).  Released in 1980 this was one of the last albums I worked on at the PolyGram factory before moving "up west".  I was making the vinyl of some of my heroes. Excited to see Carrack's name on the release sheet ("How Long" remains a favourite) I was disappointed by the artwork and the lack of interest actually given the release by Phonogram - i think we pressed all of 2-3,000.  Reading the chapter, and knowing some of the record guys concerned, tells me why.  I like it as an album - not a favourite - but it has class and epitomises the British rock,soul sound that was fairly ignored by the labels through the late 70s - shame because the Brits were pretty good at it.
As he moved on from the 70s working with Talk Talk, Faithless and Dido you get the feeling he pined for the old days - certainly (like me) he felt the presence of less record men and more money men.  At times his dilemma was compounded as he loved the work that he did and for one reason or another he never got to finish the final product (or be paid) or would lose the friends he had made over the years (his feelings after hearing of Spenner's death and of attending his funeral are understandable).
I finished this liking Phill Brown, seemingly a straight up ordinary guy, who worked in a high period for the industry, just before the suits moved in, he evolved and survived through the respect gained from his previous work - what better recommendation to have.  He doesn't pull punches but also refrains from putting people down, many biogs of this type big up the author by rubbishing their contemporaries - it and he are all the better for it.

He continues to work in the business - holding on to those "old" values of putting the creative process beyond the accountant and by the end you feel that he has (just) come to terms with the 70s being history - he and this book are part of that story and these pages are a worthwhile read and are highly recommended.