In March 1983 I joined the newly formed european office at RCA Records based in London. It was my job to coordinate the production of CDs for the label and convert the existing catalogue to issue CD equivalents.

At that time Motown was being distributed in the US by MCA and licensed to EMI everywhere else in the world. The EMI licences were about to expire.........read on  -  The First Motown on CD
at September 29, 2010 1 comment: 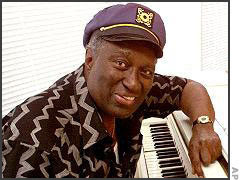 Harvey Fuqua died on 6th July 2010 (born 1929).  Fuqua was a leading light in the three decades of music as a performer, writer, producer and arranger for many well known artists.  In the 1950's he was a member of the Moonglows which later included Marvin Gaye(from 1959).  With the group he hit with "Sincerely" in 1954 and "Ten Commandments of Love" in '58.  He married Berry Gordy's sister Gwen and together they owned and ran the Tri-Phi Label which first contracted with Junior Walker and the Allstars.  In '63 the label was acquired by Motown and Fuqua turned his talents to a raft of stars including Walker, Gladys Knight and Marvin Gaye (who he brought to the label).  He wrote and produced a number of hits for the label including "Ain't No Mountain High Enough" and many of Walkers hits including "What Does It Take (To Win Your Love)".  Post Motown his biggest success was as a producer of disco, most notably "You Make Me Feel (Mighty Real)" for Sylvester and also worked with another ex-staffer at Motown, Johnny Bristol.  He reunited with Marvin Gaye for the "Midnight Love" album in 1982.

Pick up any Motown compilation and it's likely he's featured there somewhere.  One of the unsung heroes.

Not Lost But Found - Bon Iver

I'd seen the name Bon Iver around but never taken much notice not knowing the music or the act (I now know it's a band and not an individual). Last year I watched the BBC coverage of Glastonbury and flicking around saw their set.  Knocked out.  They were excellent.  I then captured the mp3 of this which is below.  After buying the albums and Blood Bank EP I am a firm fan.  Nothing better than finding something new out of the blue, totally unexpected and wondering why you have missed it in the first place.  I really thought this was an old hand singing english folk songs who someone had wheeled out for a last gasp on the festival circuit.  Nothing to a name obviously (I was told it's derivative of the french "good winter" "Bon H'iver" as they are canadian)  If that's not true well.... Bon Iver Glastonbury 09