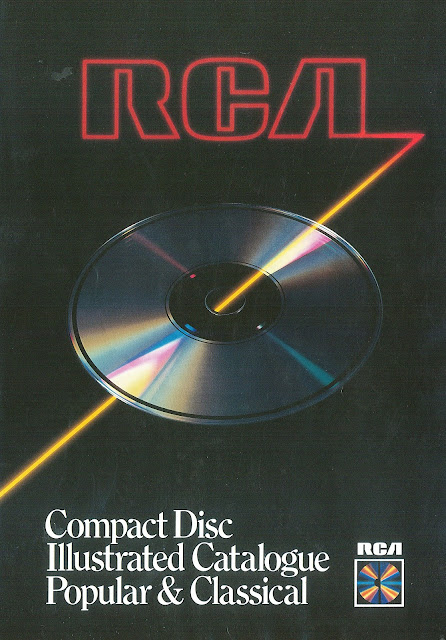 In 1983 I was working at RCA Records European office coordinating CD releases.  The format launch first in Japan in October 1982 and then Europe in March the following year had gone so well that there was a worldwide shortage of manufacturing capacity.  RCA had got in on the act quickly and had put out about 20 releases both pop and classical.  Whilst you would normally never see both in the same catalogue, this was produced to entice the audiophiles to buy RCA rather than the dominant Philips catalogue.
Here is the cover of the first ever CD catalogue from the label.
(The US launch would occur in October 1983)
at May 26, 2012 No comments: 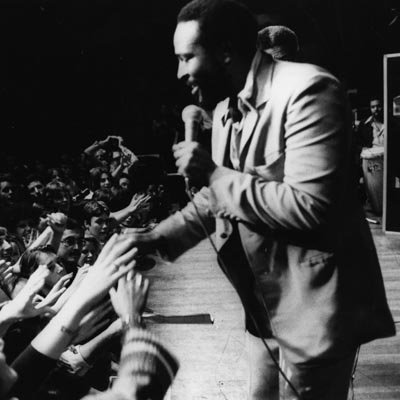 Thanks to Nathalie - who on reading my posts on the MPG gig I attended in 1976 found this picture from the Royal Albert Hall appearance two days later. Sad news of Donna Summer's passing.  Here was a true artist that although always labelled "disco" delivered much more.  Her career in the 70's will forever be associated with the dancefloor and her work with Giorgio Moroder.  Together they took the US disco movement in a fresh direction with the use of electronics that until that point were the tools of experimental rock bands.  Her "I Feel Love" was ground-breaking, and whilst those sounds are familiar to us all now in all genres of music it is her and Moroder's legacy.  One obit this week quotes Bobby Gillespie as saying that he bought "I Feel Love" on the same day that he bought the Sex Pistols "God Save The Queen".  Summer moved away from the scene by recording more mainstream songs on her albums "The Wanderer" and "She Works Hard For The Money" with great success.  For me, her reinvention was complete when she recorded the self titled album produced by Quincy Jones and featuring "State Of Indepedence" "Living In America" and the jazz standard "Lush Life".  Yesterday I spent a long train journey in the company of her career on my ipod.  Her "On the Radio" greatest hits concentrates on her dance-floor hits but includes many lesser known tunes (here anyway) such as "I Love You" and "Sunset People" alongside her "Love To Love You, Baby" her voice and delivery are superb, she was a writer and production contributor.  The "Four Season Of Love" album marked the emergence of dance as a major force outside of the 4 minute (or extended 10 minute) single.  The album shows the magic between Summer and Moroder and Pete Bellote by delivering a consistent piece.
Much will be said this week about her, the trials with the conflict of her faith and the sexual nature of her image, her dismissal as a diva disco queen - we should value a game changing body of work, the result of the fate of the early coupling with Moroder/Bellotte and her second and third coming.  Hopefully it may be a catalyst in helping Disco find it's place in serious music history.
For now let's remember her as a fantastic artist.
at May 20, 2012 No comments:

Attended yesterday's fair with great expectations of a good days crate digging.  This VIP fair isn't as big as the Music Mania event (next one in November) but probably good for those collectors willing to pay the big ticket desirable items.  I'm more of a pile it high and flog it cheap merchant as i like to sort through stuff.  One man's tat is another man's treasure.  So shorter day than expected, but met with the boys in doing so and swung by Fopp! on the way back.  Small haul in the form of Simply Red and Sinatra CDs for my son, together with the "Wondrous Stories" prog compilation and a couple of 70's Biddu albums on vinyl (to follow up meet my current disco craving).
at May 20, 2012 No comments: