The First Elvis Presley CDs ....Ever

Whilst there are many Elvis CD releases in circulation now, I wanted to tell the story of the very first Elvis music committed to the format.

In 1983 I started work at RCA Records' newly formed European Regional Office (ERO) based in London. I was appointed to coordinate the labels' continued move into CD. The format had been launched in Europe in March of that year and was due to hit the US market in October. Early signs were that the format was popular beyond the original audiophile target market and was moving into straight pop and rock. RCA was converting the most popular items from its catalogue as soon as artists clearances could be obtained.

In the early days of CD each record label had to pay Philips and Sony a premium on the purchase price of CD manufacturing in order that both companies could recover the vast sums sunk into the research and development and the setting up of the expensive hi-tech plants. On the other hand the labels were doing deals with artists that although the dealer price of a CD was higher - artists would only receive the level of royalty payable on the equivalent LP.

Lead times in making CDs were much longer than those for vinyl and, due to the early success of the market, manufacturing capacity was in short supply worldwide. RCA had signed up to PolyGram to make its product in Hannover, Germany.

The European Office had already issued a number of classical CDs and was working on some popular titles (The Year Of The Cat by Al Stewart; Sweet Dreams by The Eurythmics amongst them) but our Vice President, Alan Cornish, wanted to get the first Elvis CDs into the market place in advance of our US parent.


A compilation was commissioned and Roger Semon, RCA UKs resident Elvis expert, pulled together 60 hits across Presley's career to appear on 3 volumes within a box set. We applied for artist clearance through the New York office. This was surprisingly forthcoming as the US company were planning to get the catalogue out as soon as CD was launched in the US and had already started the process with the Presley Estate. 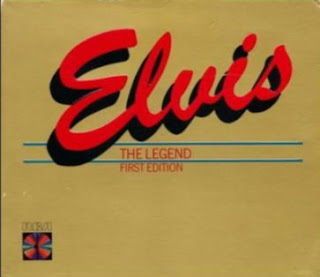 A debate went on about how this was all going to look - should we use the three disc plastic boxes only by that time used for opera releases or go for three single cases within an outer box - whilst this was more expensive it was preferable from a logistics and a final "feel" point of view.  We briefed our design agency, Ranel, to come up wth a box package for the product which would be suitable across all territories. This involved getting templates from PolyGram, as they held all the "approved" designs for packaging of the CD format - this was so they could control the appearance of the product across all markets giving a consistent appeal.

Our Marketing Director Greg Rogers, felt that we had to make this launch particularly special, so it was agreed their would be one production run of 5,000 copies only and each box would be sequentially numbered. Each would have a certificate stating that it was the first Elvis music to appear on CD and each disc, certificate and box would bear the unique number.

Orders were solicited from the national companies across Europe and we could have sold 15,000 - but there was a problem. PolyGram was the only CD manufacturer in Europe and although other plants were under construction in France, Germany and the UK, they would not be producing until well into '84. Supplies from Japan were equally scarce with the booming Japanese market selling all that could be made. Our contract allowed us an allocation with a maximum monthly of 30,000 discs. Our original plan for 5,000 would soak up half of the November allocation. We re-scheduled the release programme pushing a raft of smaller classical releases and national pop products back into the new year. 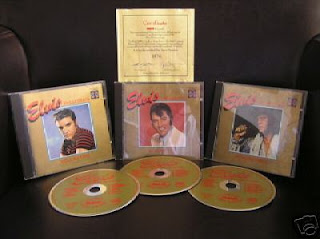 I was trying to sort out the product itself. The box was to be gold and we wanted the booklets, inlays and the labels all to match. Printing on various grades of paper to the same shade is relatively easy. The process used by PolyGram to stamp the label image onto the CD consisted of picking up an image in paint on a large rubber dome and placing it on the disc. This didn't allow for fine definition (say - of finer fonts in type); The paint colours were also limited. My contact sent me samples of the "gold" which were more like ditch water. Even the final colour agreed (below) was a bit brass like

PolyGram also hated the idea of putting a sticker on each disc with the number on it; of marrying up the discs with the certificates and boxes. They didn't like the idea of the sticker as they felt they would need three months of tests to check whether the polycarbonate broke down due to the chemical substances in the glue. They also felt that the weight of the sticker may cause some discs to skip on some players due to the unbalanced (eccentric) spinning. These were bombshells with little warning and played havoc with our plans.

We ditched the sticker idea as it was too hard to convince the German boffins that it would work (I still have a CD with a sticker on it - no degradation - so my research concludes otherwise) - there would be no numbers on the labels. We quietly organised for a local German company to carry out the careful box and certificate matching and the final assembly. On telling PolyGram this - Guess what ?- as soon as they realised that the work was going elsewhere they relented and said they had to take care of their customers and the products and they would be happy to do it. 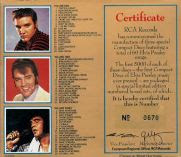 By October we discovered that the RCA US CD launch program was in disarray and US company would not be able to use all the capacity from a new manufacturing agreement they had struck with Nippon Columbia (Denon) in Japan. Alan Cornish quickly negotiated to take this on in order to still produce the products moved back due to Elvis (He also had another deal up his sleeve with Motown - read about that here).

How the Box Set Appeared in the first ever RCA CD Catalogue... 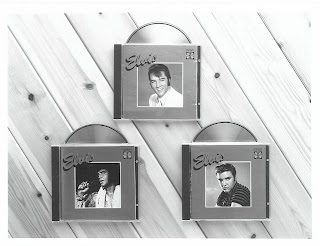 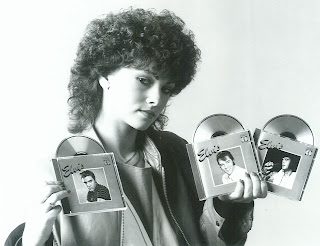 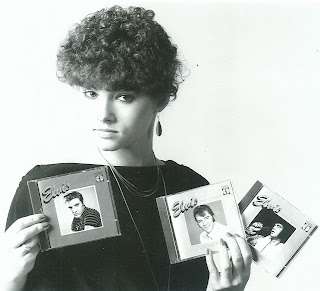 The release was in November 1983 and all sold out from the national companies by the end of the year. To commemorate the release of the first ever Elvis music on CD - the box numbered 001 was sealed in a large perpsex case with the component parts displayed and presented to the Country Music Hall Of Fame in Nashville.  002 was made for press purposes within the UK - I have no idea what happened to it - but I know which guys to ask first.

I own number 104 and it remains shrink-wrapped in my collection (hence my inability to show you new scans of the certificate or the brassy "gold" PolyGram painted labels from my own copy).

Copies of the box are available every now and then on ebay and the like (see picture above) - the last one I saw was up for £499.  The Collection CDs were released across Europe during February and March 1984 - possibly slightly later in the UK. 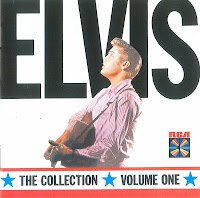 Later in 1984 RCA Germany produced a second edition of the box (much to our disgust in the European Office) and made (and sold) 5,000 copies - these were exactly the same with a silver box and labels rather than the gold.

It was a great period to be in the music business, being there for the launch of the CD market but then working on iconic releases was very special.

I currently own the limited edition mentioned in last paragraph that has the silver box with the 3 cd’s. When I purchased it came with no certificate as it was the second limited edition set of only 5,000 sets made with same music and pictures. The bigger difference is each CD is stamped with the limited edition number of 316 plus the capital letters of LC for limited collection. I am the original purchaser. Does anyone have any idea of the value of this set as I am open to a fair and honest offer.

Sorry Frank - the LC316 is the label number for RCA in Germany (which was the prime market for this release) - you'll find it on every RCA Europe release. It has nothing to do with the limited edition. The number you are looking for should be on the box (and of course on your missing certificate) - sorry.

Is this box mono or stereo? I am just buyin my first elvis cds and want to avoid reprocessed stereo. I prefer true mono as it would have been heard most commonly.

It varies track by track i'm afraid but the versions chosen would have been true to the originals - i.e where mono came first they would have avoided any stereo conversions - worth checking on Presley websites first before you commit.