Let's Get This Party Started

Here's the happy Mr Edison giving his all on the first sound recording ever made...

"The Music Goes Round And Round"

The post about the Louis Barfe book made we relook at the other books I have on the history of the record industry.  I would recommend the following for anyone who is interested in the whole story from Edison onwards.  "Where Have All The Good Times Gone?" is one of the few that, as it is more recently written (2004) can bring you right up to date.  The following are books covering the story from the late 1800s through to the 1970s - so pre CD, pre digital, Napster, Apple etc.

The widely acknowledged master is Roland Gelatt's "The Fabulous Phonograph 1877-1977" which was first published in 1954 and updated in a second edition in 1977.   This is the starting point I would recommend as it lays out the problems and events of a technology based business intertwining with entertainment for the first time (pre film, TV etc).  The phonograph was the first invention of Edison to get him noticed, although he would go on to contribute to the development of the commercial use of electricity, invent the light bulb, the carbon microphone, the Kinetogaph and thousand others.  A history well written and less about the music more about the industry.

"Putting The Record Straight" by John Culshaw pubished in 1981 is a personal history of Culshaw's career with British Decca as a musical director.  As you would expect given his direct relationship with the artists this is a more musical story and certainly helped me build on my knowledge.

"On And Off The Record" by Elizabeth Schwartkopf is her memoir of Walter Legge, the EMI producer of some of the major classical recordings of his time.  Scwartzkopf was his wife and she combined Legge's own writings together with her own memories of her husband's career.  This would be more interesting to fans of classical music as it gives an insight into the prima donnas of the day, the challenges faced with recording large orchestras performing long compositions without the recording and editing technologies available today.

"The Music Goes Round And Round" is a collection of writing by Raymond Horricks and Peter Gammond covering many aspects of the business including the role of producer; the engineer;  the effects of the pop explosion of the 50s and 60s; Marketing and The Media.  Again this, after the first two mentioned here, would provide anyone with an understanding of the development of this, let's face it, fairly young industry.

All of these are available although probably second hand - the Gelatt in it's second edition can go for up to £50 and the Culshaw more, so shop around.

Where Have All The Good Times Gone?

It's hard to think that 120 years ago the only way of sharing a song was to sing it or play it on the piano that sat in most middle class families' parlours. 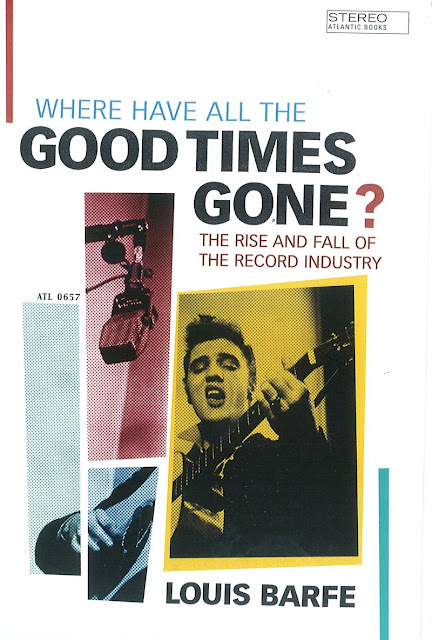 Sub-titled "the rise and fall of the record industry" this book by Louis Barfe is one of the best I've read about the history of commercial recorded sound.  The benchmark here will always be Roland Gelatt's "The Fabulous Phonograph" and this comes close but as the former was written during the sixties boom there is a lot to say by way of updating the history.  This does so admirably, pulling on interviews with those who were there, from artists, managers and industry figures - reflecting on innovations like the advent of CD; the decline of former majors like British Decca; or giving a picture of the personalities who drove an industry both up - riding the various booms of the post war baby boom teen explosion or the re-marketing of established catalogues on new formats and; down - failing to realise that you can't control internet distribution in the same way that you can physical product.

I was particularly interested in the sections covering the rise of PolyGram and the launch of CD as I was there and I know that Barfe has captured the mood of the industry at the time perfectly.  The earlier sections covering the format battles of Phonograph and Graphophone, the mono and stereo debate and the "speed battles" of the 40's and 50's with the arrival of 45 and 33rpm microgroove reflect similar battles repeated later over VHS/Betamax, Cassette, MiniDisc, 8-tracks etc.  Makes you wonder why they didn't learn.

The epilogue chapter in the book (which was published in 2004) covers the aftermath of the Napster cases; the resulting threatening stance of the industry taking legal action against users of peer to peer networks and filesharing sites in a dogged determination to hold onto the past irrespective of technical innovation and; the arrival of Apple into the music business with i-Tunes and the i-Pod.

I would highly recommend this to anyone interested as a background to what's sitting on their shelves (or indeed stored on their hard drives) - it's not only an informative but a well written and entertaining history of our times and those of our parents and grandparents. 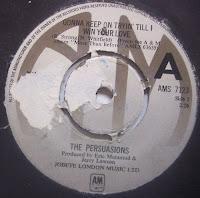 And try I did for about 30 years to find this single again (why - see ""The Lost And Found") and like the proverbial London buses two come along at once.  After a determined search through many a singles box at the London VIP fair in April, I tried ebay for the 100th time.  Amazingly a search produced the single and the vinyl album it came from.  Thinking that if I go for the single only and the quality is poor, I might not have another 30 years of search left in me,  I bought both.

This is a real gem of a single.  A live performance of the Motown song, written by my faves Norman Whitfield and Barret Strong, recorded by many artists usually as an album track or B side.  Marvin, Jimmy Ruffin, Edwin Starr, but for me the definitive Motown version was always the Temptations take on the "Sky's The Limit" album.  The Persuasions are an accapella group with a history dating back to the mid 60s.  Still going strong they have a definitive sound with gospel, doo-wop and soul to the fore.

The album "More Than Before" has a live side with covers of Bobby Womack, Gladys Knight and the Pips and Temptations songs. This was their first album on A+M since switching from Island and the new label caught some of their regular set to start the next phase of their career.  Another change was the studio side is with instruments and added to the usual flavour.

I love this and it was worth the wait.

Lost and Found indeed.  In 1974 I went to see Kokomo and Betty Wright (riding high at the time with "Where Is The Love?") at The Roundhouse in North London.  At the bottom of the bill was a band with one single to it's name.  They were wonderful - looking more hippy than hip, more psychedelic than soul, more rock than reggae - but they were GREAT.

Signed to Charisma which was then a small label
(pre Genesis success) with a diverse roster but mainly in the rock genre and mainly album releases.

This single (their first) is a cover of the Diana Ross classic written by Deke Richards.  It's a pop gem.  See what you think.  I found this on ebay for £5 - worth every penny - 36 years old and in mint condition.  There was an album which has varied reviews across the web - I think this is the highlight.

All The Fun Of The Fair

I spent a long day at the VIP Music Fair on 16th April, something I've not done for some time.  Interesting to see how the dynamics of these events has changed.  To me there were less specialists with the big displays of high value items and more of the "pile it high and flog it cheap brigade" frankly I like the latter as i'm not a completist wanting a particular item due to a particular colour on a label or a catalogue number.  I just want the music on a good condition/quality carrier.  On occasion I buy stuff for old times sake (see my posts labelled "the lost and found") but they can be available in the £2 singles box just as much as some specialist with singles marked up for exorbitant prices.  I did see the Chuck Jackson single i've been after but for £30 i can afford to buy the CD when I can find it (it's been deleted too now).

I particularly liked the two german guys with a stall full of new unused 7" singles from the 70s and 80s - who cares that they're on the european label or catalogue numbers.

So what did I get

Singles by Splinter, The Original Mirrors; Rare Earth; Pacific Eardrum; Steve Winwood (Valerie); New Birth (a fantastic version of Bobby Womack's "I Can Understand It"); One from my wants list Monsoon "Ever So Lonely" classic!; as is The Maisonettes "Heartache Avenue" and "Latin Hustle" by Eddie Drennon; Another gem in Wah! "The Story Of The Blues" - amongst others.