First port of call on my recent trip was good old New York.  Arriving on 7th September - a horrible day weather-wise sailing up the estuary in the early morning (clearing under the Verezano bridge by only 30 metres!) past the Statue of Liberty, into the Hudson and past the new Freedom Tower eventually tieing up three berths from the USS Intrepid aircraft carrier, which serves as a museum for naval aviation, in the early morning mist and rain.  The City was particularly busy with NY fashion week in full swing and amid preparations for the 10th anniversary of 9/11.  We were there for two days - the first was very touristy - using the Gray Line hop-on hop-off bus tour from Broadway to reacquaint ourselves with the City and introduce it to our friends who hadn't been before.  Bloody marvellous! 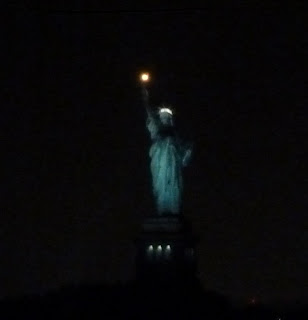 The Lady emerges from the mist 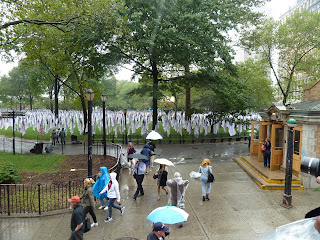 Battery Park memorial to those who lost their lives on 9/11 - A flag for each name.

I think the City isn't as clean as it was and the weather, heavy traffic (due to the forthcoming events) and the rain all added to that general impression.  Don't get me wrong, I love City life - the hustle bustle of urban existence is great.  The aftermath of Irene perhaps?

We shopped and ate and generally had a great time, starting at South Street Seaport and working our way across SoHo and up through the Village back to Arcadia.  Our friends seperately visited all the sites they could in lower Manhattan  and the Eastside in a day and came back as exhausted as they should have in this iconic City.  Here's some pics from day one.


The second day was a contrast with the humidity and blazing sun returning and the blue sky giving a different view.  We took a trip up the Westside right through to Harlem, walked the Museum Mile and 5th Ave (dissappointingly finding that whilst the £/$ rate is good - US prices have jumped like ours).  We ate well in Rockerfeller Plaza at Ruhlmann's - very good but pricey as you would expect in such a prime spot.  Clothes from Banana Republic for him and from Anthopologie for her. Nostalgia for me of seeing the tower at Rockefeller, the top a tourist site "The Top Of The Rock" but 24 years ago my RCA Europe business card was the only thing that got me to the then private viewing platform on the (then) RCA building.  I also saw the old RCA Records HQ at Ave of the Americas.  Here's some more pics:- 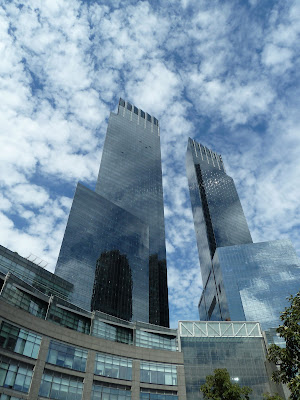 Left:-The Time Warner building, at Columbus Circle, reflecting the glorious blue sky on day two - such a contrast in 24 hours

Below :- The modern Norman Foster extension to a more traditional building - not sure the two go together but love them individually. 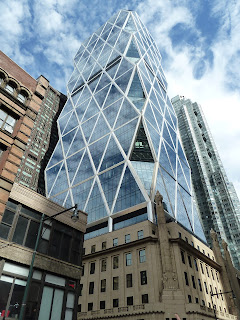 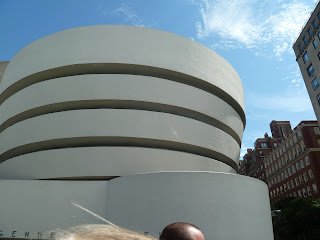 At the end of day two we sailed back down the Hudson in the fading evening light and saw the skyline from a new perspective - not great light but great views. 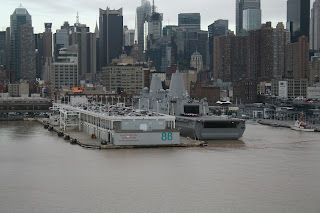 As we left the crew of the USS New York conduct a ceremony on the flight deck (or perhaps a rehearsal?)  The USS New York has steel salvaged from the Twin Towers in its keel for ballast. 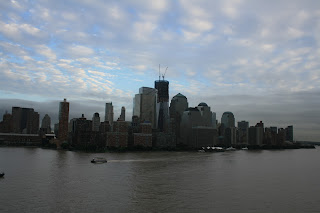 The Freedom Tower emerges over the Battery Park Financial District 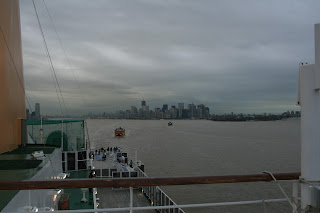