This was a Mercury single back in '79. To promote it Phonogram pressed 500 white label 12" copies which then had the artist and title rubber ink stamped on them. I know as I worked in the factory and was responsible for getting them made. After they were pressed I stood with a lady in the finishing shop whilst she stamped away, boxed them up and passed them to me for dispatch to the label's west end offices. They were then destined for radio stations and for promotions all over the country. I'd had a sneak listen in a quality control booth as I was being told this was the next big thing. Great track. So on returning to my desk I asked my label contact if he would send me one for all my good work that morning. He agreed then promptly forgot. So 25 years later i'm on a quest to buy a number of almost long forgotten tunes. I'm at fairs and on ebay. Blimey i managed to find a copy. In Wisconsin! I pay £25 for it and it now sits on my shelf with a few others, has been played a few times and makes a short appearance here. This band were a forerunner of the Lightning Seeds as it featured Ian Broudie.  Hear it here 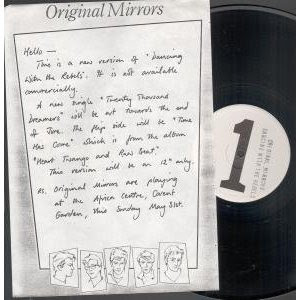 p.s. (18th August) I have now found that there is a compilation album available which includes this track on one of those CD-R from the copyright owner (around $60) via Amazon
at July 23, 2010