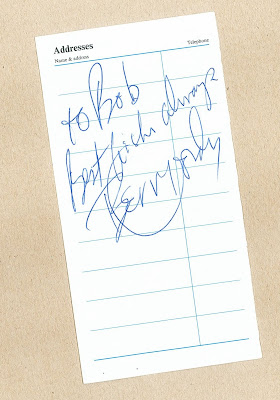 Whilst working at RCA in 1986 I sat alongside Jaqueline Buxton who coordinated european marketing campaigns on behalf of the national labels and their licensees.  One such licensee was Motown.

The project she was working on at that time was a box set of vinyl albums called "150 Hits Of Gold".  Motown International had the idea that they would promote the sale of this set by running a competition open to all.  The first prize was an expenses paid trip to LA for a few days, the highlight being a "star studded" party with the Motown stars.  Jacqueline knew I was a huge fan and offered to get me an autograph of any of the stars that would be there.  I said that it wasn't my sort of thing band joked that if the chance arose the only one I would want would be from Berry Gordy - The man who started it all.

The release went ahead and a few weeks later the winners (together with far too many RCA minders from around Europe) boarded the plane to LA.  On the trip JB was told by her more experienced Motown label managers that she wouldn't get to talk to the man and he certainly wouldn't sign an autograph.

As it happened she did and she asked if he would sign something for a huge Motown fan in her office who was working on the Motown CD releases.  He agreed and she ripped a page from her diary and he signed that.

One of my treasured possessions.

The second prize was a copy of the box set.

For the story of the first CDs on Motown go to the page tab at the top of the page
at October 07, 2011

A few years back when there was a buzz about Berry Gordy and Suzanne DePasse working on a Motown 50th anniversary mini series for television, I thought it would be cool if I could find an autographed copy of his memoir, "To Be Loved."

Various inscribed copies were available, but they all were in the $100 plus range. I kept searching and found a non inscribed copy for $40 bucks. I understand that Mr. Gordy signs very few items and feel very lucky to have this in my collection.