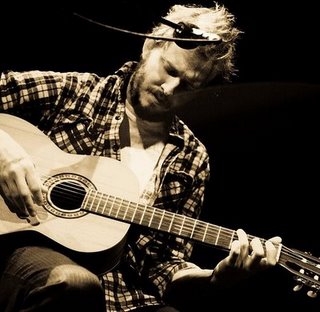 I came relatively late to Bon Iver - captured by the BBC coverage of his 2009 Glastonbury set.  He made a triumphant return to London opening a short UK tour at Hammersmith last night.
A band of 9 covering 3 guitars, 2 drummers, keyboards, brass, violins and, at one stage a human beat box.  Opening with "Perth" from the self-titled new album here was a sign of what to expect.  Wonderful musicianship, expertly performed with the added live component.  It made you question how long these guys had been together as they were a very tight unit, changing instruments regularly and clearly enjoying the ride.
The new album for me is still at that "I don't know the titles as I have to listen to the whole thing - it's so good" they seemed to perform it all adding a Bjork cover, "Blood Bank" "Wolves" (with the now familiar audience participation (as he said not a sing along a contribution)) together with other tracks from Justin Vernon's "Long Discog" as he referred to it.  Between song chatter was mainly him expressing thanks for the reaction he had received but the show was none the less for such interuption - they got on with it, songs segued together with passages making full use of effects pedals and highlighted instruments.

The encore version of "Skinny Love" with Vernon and the two drummers at their instruments and the other members around two mikes providing hand-claps and harmonies was wonderful.  At the end he looked moved by the reaction he had recieved.
The crowd were treated to a consumate show of what music can be and do.  Difficult to categorise but the soul in his voice, the almost Brian Wilson like harmonies and overall construction, broad arrangements and a great set of songs expertly performed with passion was enthusiastically received from a keen crowd.